Funny how a little competition has increased the demand for bananas at home.

When I first got Peanut-Dog, she absolutely HATED bananas, at most, she would hold it in her mouth for a bit, then spit it right out and stare at me like I was being stupid.

I had tried countless times feeding her bananas, because I know they are a good source of potassium, manganese, copper, vitamin B6, biotin, and vitamin C.

Apparently, dogs are supposed to love bananas, but due to Peanut-Dog’s disgust with them, I just assumed that Jellybaby would find them unpalatable as well.

How time flies~~ my little Jellybaby had turned 6 recently, and for his Birthday, which I completely forgot until Facebook reminded me, I got him a banana.

The reason being I had nothing else better to give him. Yes, I am such a good mum!

I thought at least he would eat a bite or two, since Jellybaby ever only turn down food which are too sour for him.

So I proceeded to break up the banana in a small piece and gave it to Jellybaby, which he smelled for less than a second before gobbling it up.

A sense of relief came over me, and I thought to myself, ‘Good! I didn’t just waste the banana!’

I continued to break up more banana for Jellybaby, which he happily consumed.

That was when I noticed Peanut-Dog staring at me so very intently.

Naturally, I just ignored her, since I thought she hated bananas.

Well….. little did I know.. she has since had a change of heart~~

Somehow, the fact that Jellybaby and I were both busy munching on the banana (one entire banana would have been too much for Jellybaby to finish), it had triggered something in Peanut-Dog.

As we were about to finish the banana, Peanut-Dog abruptly shoved herself between Jellybaby and I.

Unsure of what Peanut-Dog was doing and wanting, I decided to try giving her a little bit of the banana also.

I thought maybe she feels left out, and once she bit into it, she would spit it right out again.

However, to my absolute amazement, Peanut-Dog just ate it.

It was the first time she has ever eaten a piece of banana.

Needless to say, both of my fur babies now LOVE bananas.

Last night my friends and I went to watch the movie IT. 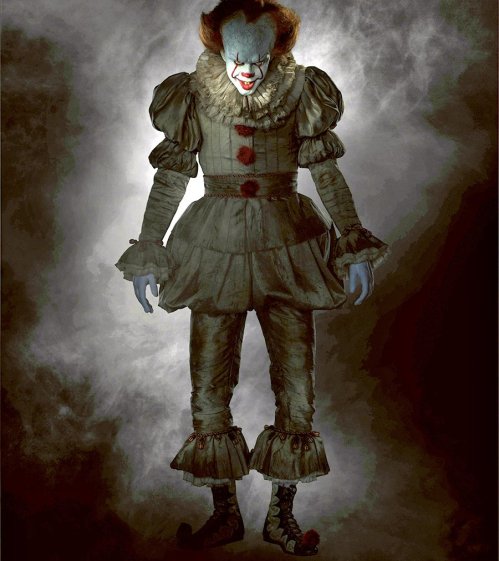 I did not expect it to be scary for me, due to being very desensitised to horror movies, having grew up watching all sorts of horror, gore, and slasher films.

(The first horror movie I remembered watching was Child’s Play, I was a pre-schooler back then, and thoroughly enjoyed it.)

As predicted, the movie did not scare me at all, however, what I did not expect was to find it really sad.

Unfortunately, the movie IT does quite heavily rely on one of the horror movie techniques, which I dislike, the unexpected “cheap jump scares”.

I joked to my friends after the movie, that Pennywise must really have a fetish for red balloons, and doesn’t seem particularly competent in capturing children.

The movie appears to touch base on issues surrounding the dark side of humanity, dealing of loss, struggle of childhood/adolescence, coming to term with one’s femininity, and fear of the unknown.

The story takes the audiences through the main characters’ collective journey, in an attempt to conquer these issues, which are presented in different context for each of the character.

Personally, I found that some of human characters were in fact just as, if not more, monstrous and horrible as the entity which the Losers’ Club had named IT.

My understanding is that IT feeds on children and their fear, because it needs to do so to survive.

However, some of the abuse and violence inflicted upon the members of the Losers’ Club were done so by other fellow human beings, and for their own pleasure or to “compensate” for problems that they themselves were suffering from.

After watching the movie, it made me somewhat curious to read the book version of IT, since I suspect the book will dive deeper into the issues and topics mentioned.

I see the movie being more than just about an evil monster/entity residing in a small town.

Overall, it was a solid horror film. Hopefully they will not incorporate, or at least cut down on the “jump scare” tactic in the sequel.

A present to myself~~

Going to start wearing it tomorrow! 😀

So much has happened in life that I don’t know where to begin.

First of all, I have been very lucky to secure a wonderful position with an international company, which I have been working for since the end of last year.

To be honest, leaving my former workplace was one of the best decisions I have ever made.

There was a drastic change in management, after the former director’s passing, and everything just went completely downhill from there onwards.

Being a leader requires unyielding integrity.

The people who were suppose to lead were not leaders.

A week or two ago, a friend of mine challenged me to a thing called the Belly Button Challenge.

He explained that it is the latest viral to attempt reaching round your back with either arm, touching your belly button and upload the photo.

So naturally I took up the challenge!

My only kryptonite is the inability to say “no” to what I deem is a worthy challenge.

WOOHOO!! Boy was I happy to complete the challenge so easily, and just could not wait to upload the photo and show him up with it!

That was when another friend piped up saying the photo doesn’t prove anything, since there was no face in the photo, therefore, it could have been anyone in it.

As expected, there was no more dispute after these photos were uploaded~~~

I was able to rush out during lunch break today, to get Baby P something different to celebrate her third Birthday~~

Hope you and little brother C enjoyed the special treats!!! 😀

One day I will look back to my life right now and miss all the good times (and bad times).

I will miss the Saturday morning breakfast at the Café with Mum, and the Sunday evening dinner at restaurants with my fiancé.

The truth is, when I first watched Despicable Me (the first film)~~

I mused to myself, ‘Let’s see how long they can get away with this.’

I must admit I am a very suspicious individual, however, there are a number of attributes, that these animated creatures have, which are very closely associated with Asian stereotypes.

*All look the same

A second movie (Despicable Me 2) has since been produced and released, and it seems like I may be one of the few who believe that the inspiration for Minions may have come from Asian stereotypes.

Well done to the animators for incorporating these stereotypes so subtly into these little Minions, and knowing exactly when to stop pushing the boundary, that no one appears to have noticed the racist undertone of the film.

In actual fact, it was done so well that alot of  Minion fans are of Asian descent.

It must be entertaining to you that not only was your intent undetected, a large number of Minion fans are actually of the race you are trying to make fun of!! 😉

You are probably laughing your asses off in your expensive La-Z-Boys, seeing that these films have done so well!

Ah~~ I have exercised my patience FOR SO LONG to keep this theory to myself, but upon seeing the release of the second movie I just could not endure it anymore, and decided to once and for all share my suspicion with the world! 😀

It’s the weekend and I got to spend some quality time with Mammy!! 😀

We went to Theobroma Chocolate Lounge for some delicious chocolate fondue~~

I was away on a conference in Australia last week.

It was such a fun trip!

Would have been even more awesome though if I had gotten the chance to cuddle a Koala!

I had posted some photos from it on my other food-related blog.

Please feel welcome to check them out!! 😀

Good morning from New Zealand! I hope you all have a better morning than me!!

It is Saturday morning, and I was planning to do a blog entry on my brand new camera today.

It was all so exciting when I went and picked up the camera from the seller on Tuesday. The seller made the effort to assure me that it is brand new and had never been used. (The camera was still in its original packaging, and did appear brand new to me.)

As of this morning, all ready to go, I had the brand new battery well and fully charged, and even rushed out yesterday (skipping morning tea) to purchase a Class 10 micro SDHC 8GB card especially for it….. only to now discover, when I turned the power on for the first time, that the touchscreen does not work.

Therefore, now my focus is on returning the faulty camera to the seller in order to secure a refund. I had also taken plenty of photos during the unboxing process, which are redundant now~~

Being a first time Trade Me user, I was silly enough to give the seller a positive feedback without testing the traded item out first. For someone who is already very paranoid, I am probably going to become even more paranoid now~~~~~

To be fair though, the seller might not have known there was an issue with the product. I had contacted him regarding the issue, and am in the process of waiting to hear back from him.

I had also made contact with Trade Me to inform them of my faulty purchase, in case the seller is unresponsive, which I dearly hope doesn’t happen!!